Oooh we did all so covet the titanium coloured scissors one of my fellow friends was using when all the Mythago ladies convened last weekend for our latest kit making session. I totally understood why she bought them on impulse when she clapped eyes on them recently. Probably just as well that I wasn't with her at the time as I could easily have seen an identical pair coming to join me at GBT!! My everyday fabric scissors are rather more standard orange handled jobbies, but I do have these which are strictly for display only. 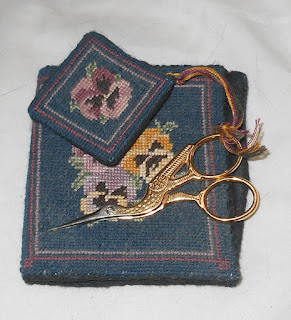 The form of them will be familiar to many. I'd never actually stopped and asked myself what the bird was....perhaps a crane, but I am now aware that they depict a stork.  I learnt recently that these scissors were never originally intended to be used for embroidery. Instead they were used up until the 19th century by midwives to clamp the umbilical cord and the shape of the blades reflected this use. Furthermore this explains the choice of bird with the stories of the stork dropping new babies down the chimney. Some pairs even had a little space on them which, when revealed, had a tiny baby in...I've included a photo on the link here https://www.worthpoint.com/worthopedia/silver-stork-birthing-scissors-288403554 The change over to sewing it's believed is simply down to the midwives spending the waiting periods stitching.