Throwing in the trowel. 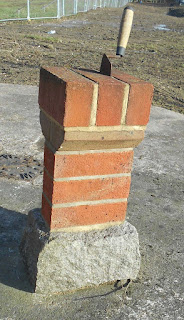 For a few years this odd little brick pillar with its pointing trowel has sat rather inconspicuously just off the  Horsham bypass on one of the junctions near a roundabout. I knew of its existence, but, I'd never been quite sure where it was until last week. Various people have put theories forward about what it represents....a memorial to a local bricklayer who lost his life on the road perhaps or a nod to the now closed brickworks? There's no name on it and nothing in the way of flowers. I understand it has been decorated with Christmas lights though at the appropriate time of year!

So there this little oddity stood on its ownsome lonesome and then a couple of weeks ago until this new version mysteriously appeared.

It now has a companion! The rumour is that the original one was put up by a local bricklayer as a joke. As to who's behind this one....I have no idea, but it makes for an unexpected surprise and talking point. Maybe the point of them, like follies, it to be just that....pointless! 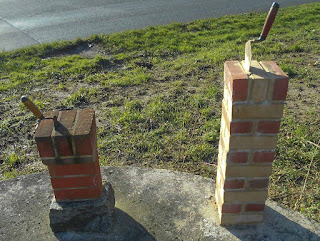