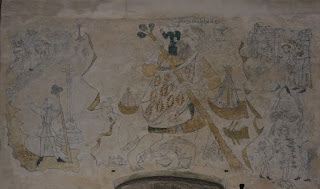 This wall painting of St Christopher is in the church in Shorwell on the Isle of Wight. The Medieval belief of the time was that you if you caught a glimpse of this particular saint in the morning you would have a safe day. I interpreted "safe" as being kept generally safe from harm, but somebody explained that it was actually from suffering a sudden death [mors improvisa]. It was the greatest fear that you would die without being able to confess your sins and be absolved of them. I believe that unshriven is the term used for this scenario. Definitely not that far removed from all the folkloric ideas around death and how to avoid it over the years that I've read.