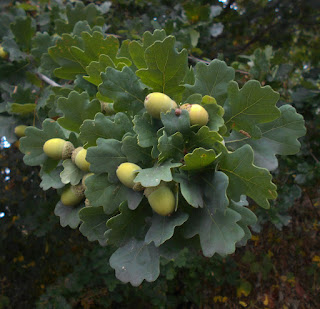 Apples are ripe
And nuts are brown.
Petticoats up
And trousers down.
Spike Milligan
So here we are on the 1st September and the beginning of the Autumn months. I love September with its nip in the early morning, mists, warm spice coloured foliage and the promise of an Indian summer. It was traditionally the time for nutting too when the hazelnuts were ripe and people would go out to pick them as a valuable source of protein that could be added to the winter stores or used to make flour.  Some would have been sold to the dyers. It was acceptable to go out any day bar Sunday for fear that you might meet the devil! However, dare I suggest that you were probably at much more risk of adding to the population for it was well known that a good year for nuts meant that the following summer would be good for babies. I would imagine that the young couples being able to go to the woods unsupervised thoroughly enjoyed the privacy and break from day to day work it provided!!
Arilx
at September 01, 2020