Brain is refusing to play ball this evening and has gone off for a wander in search of fun. As I'm not firing on any cylinders I'll stick to our domestic doings instead which doesn't require much thinking about if you don't mind!!

During lockdown our lovely neighbours gifted us some spare pepper and tomato plants that they'd grown from the seeds they'd saved from the veg they'd bought from the supermarket. We tried this ourselves several years ago and didn't have any joy. F1 hybrid was the reason apparently, so I had little hope of any greater success this time round. However, sometimes it is excellent news to be proved wrong.....we've had modest sized peppers and masses of red tomatoes. 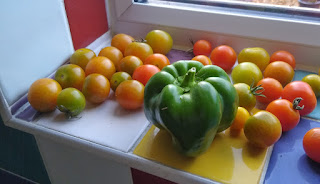 With the weather having changed the tomato plants were dying back so Mr GBT salvaged a further 3lb of green tomatoes. Realistically they were unlikely to ripen, but we're both on the same page when it comes to waste and we like a challenge.... 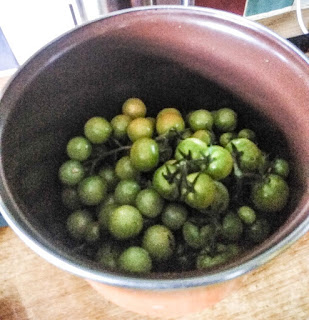 Mr GBT doesn't like raw tomatoes, so what to do with them. We toyed with the idea of doing some fried green tomatoes, but in the end chutney won out as we had all the ingredients in. I knew there was a reason why I couldn't resist bringing some of the windfall apples I found in the free box near work a few days ago! 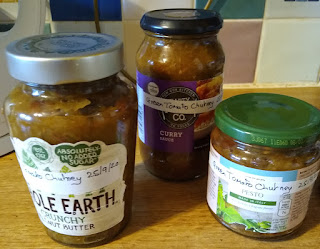 With himself being so productive I thought perhaps I should hasten on with a few things of my own. All the rosemary bush cuttings have now been dried and stripped so shan't need to buy anymore for a few more years and best of all two bottles of sloe gin are now gently steeping. Cheers😋 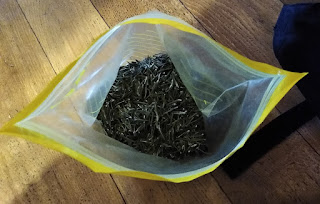 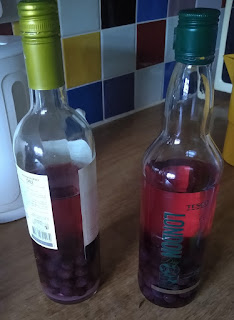