Imaginings of the Medieval Mind 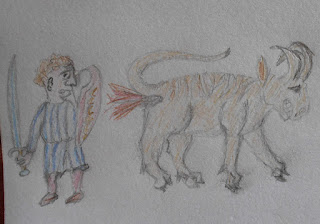 Various snippets have come together over the past few days to inspire this post. A TV programme reminded me of the weird and wonderful beasts that can be seen on the Mappa Mundi in Hereford Cathedral. Then a few days later I learnt about Medieval marginalia in a CCT lecture by Prof Paul Binski. These are the totally bonkers doodles you get round the edge of the beautiful illuminated manuscripts that don't relate to the content of the main page. Sometimes it's more of the fantastical beasts or you get surreal scenes of people riding massive snails or earthy domestic scenes. You would favour the theory that this was the monks drawing things in when bored, but this was not the case. The humorous aspect was a very deliberate inclusion and drawn in as part of the whole page design right from the outset. They were undoubtedly designed to amuse and feature on all sorts of texts from religious through to legal books. It's thought that they originated in the universities [some things don't change!]. Finally an article in an old English Heritage magazine about the wall paintings at Longthorpe Tower introduced me to the bonnacon. Something I had never heard of which needed further investigation.
So what on earth is one of these strange creatures you might well ask.....apparently it was an animal with a head like a bull and useless horns that curl inwards....its secret weapon was its ability to fire its dung out at high speeds and set everything alight in its path. Best beware then. Funnily enough Pixabay wasn't able to offer me a copyright free image of this particular being, so you'll have to put up with my Janet and John copy of one!! The one in the original drawing was grinning away at its successful handiwork too!
Arilx
at September 08, 2020