Last Saturday I met up with three chums who I was at sixth form college with a couple of centuries ago- you know you're maturing nicely when your "children" tower above you! We try to do this once a year or so and although there's not a massive amount of contact in between whiles, it always as if they've just walked out of the room five minutes before so as you might imagine there might just be a small amount of nattering when we do meet.......

I enjoy the variety of London- I am in no shape or form a city girl but it's stimulating and fascinating to people watch. There were moving floral tributes laid to Nelson Mandela at South Africa House and the statue next to the Festival Hall but the snow dome over Eros frankly looked naff to me with its ever changing digital adverts running below it and lack of swirling snow. The globe also seemed to swamp the statue. 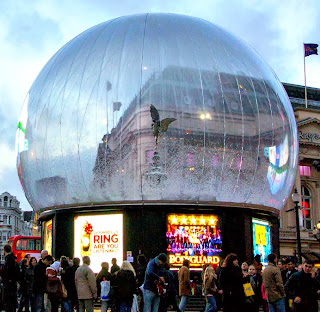 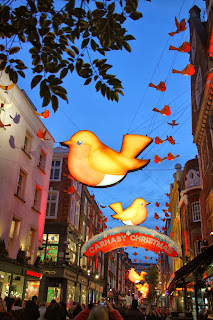 And Regent Street, as ever, was the epitome of understated elegance with its white lights and Twelve Days of Christmas. 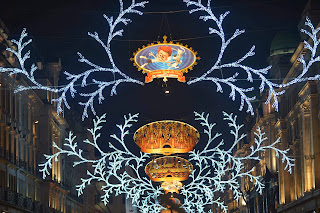 We were able to play a flying visit to the Tate Modern- forgive me but I am a little sceptical of some exhibits that make it into the mysterious world of "Modern Art"- in my book two stuffed corvids suspended on wires does not constitute a masterpiece. In the real world that would be called a bird scarer!! Despite my peasant approach I appreciated being able to see some works by Ernst, Picasso and Salvador Dali at close quarters.

Her work is influenced by the Irish folktales of her youth and she became involved with the Surrealists when she lived in Paris. Forced to flee from the Nazis she finally settled in Mexico in 1942. Her work is difficult to interpret and pin down which adds to its mystery or as aptly described by her friend Edward James:

"The paintings of Leonara Carrington are not merely painted. They are brewed. They sometimes seem to have materialised in a cauldron at the stroke of midnight"