I think myself incredibly lucky to live in such a beautiful part of the world. I am actually in the Weald which is the flat bit between the North and South Downs. The latter are more familiar to me and I never tire of seeing them as was the case when we drove through them at the weekend.

Up until 1940 the farmers operated a corn and sheep agricultural method. This entailed the sheep being restricted to certain corn fields at key times in the season so that their droppings would fertilise the land then being let out onto the downland to graze. This was abandoned when the need for domestic food production took priority with the onset of WWII and much of the grassland was ploughed up and turned over to arable farming. It is claimed that Sussex mutton derived its unique flavour from the number of tiny white chalkland snails they ate!

The shepherds themselves enjoyed a unique way of life. This is St Andrew's at Didling otherwise known as the shepherd's church. It's a charming 13th church with a Saxon font which sits up nestled in the Downs in an isolated spot- it is only lit by candles as it has no electricity 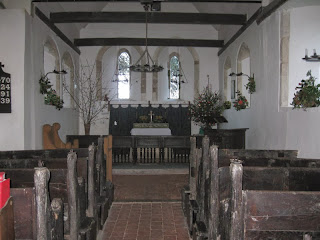 When a shepherd was buried traditionally a piece of wool was placed in his folded hands- this was to ensure that St Peter would understand the deceased's vocation and why he was so often absent from church.

Naturally superstitious the South Downs shepherds carried fossilised sea urchins which they found in the chalk as a good luck charm. They were known as Shepherd's Crowns and examples can be seen in Steyning Museum.

One of the most important times of year for the shepherd was in June when the sheep shearing gangs descended. Each would have a captain and a lieutenant the former had gold braid on his hat and the latter silver. Once shearing started the only interruption would be the captain shouting "Tar Boy" - this was the youngest member of the gang and his job was to dab tar on a nick to prevent infection.

On the night before shearing started the gang met at the Captain's house for a feast called the "White Ram" when the programme of work was unveiled. At the end of the season a similar feast was held called the "Black Ram". Both were celebrated by way of heavy drinking and games eg Turn the cup over.

Finally the Sussex shepherds had a unique way of counting their sheep:
One-erum, two-erum, cockerum, shu-erum, shitherum, shatherum, wine-berry, wagtail, tarrydiddle, den
The sheep were counted in pairs so a den stood for a score.
Just as you might expect really!