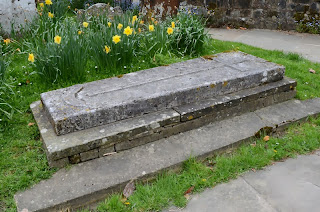 This fairly unremarkable grave lies at the entrance to my town's parish church. To be honest you would walk past it and not really notice it and for many years I did just that as I trotted through the churchyard on my way home from many a shopping trip.

It is the grave of a lady called Helene Bennett and it is aligned to Mecca despite being a burial in a C of E churchyard. Helene or Nur Begum, to give her back her original name, was born in 1770 to a prosperous Muslim family in Lucknow. She married a French mercenary called General Benoit de Boigne and followed him to London along with their two children in 1797 where he retired, a very wealthy man. He renamed her Helene Bennett and together they moved in the upper echelons of society. He received British denization in January 1798 but sadly this did not satisfy his ambitions nor did his current marriage. Instead he remarried a member of the exiled French nobility called Charlotte D'Osmonde. His children were baptised as Catholic and he moved Helene out first to Enfield and latterly a small Sussex village. Considering his vast wealth she received a relatively modest annual allowance and prominent members were so appalled by his harsh treatment of her that they offered to help her to legally lay claim to his money. She however, refused and quietly lived out the rest of her life. Known as "the dark princess" she may have provided Shelley with inspiration for his writing.