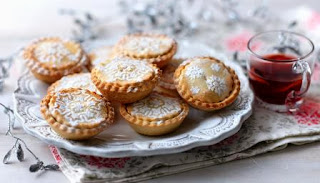 Naturally not mine....you know I don't do pastry. Oh yes I have mince pies but mine come in a cardboard box. Fortunately for me however, dear Mr GBT is busy right now whipping up a batch of home made ones as I type using the jar of mincemeat my parents kindly gave us during the week.

My only job, aside from eating them, is to furnish you with a few snippets of trivia about them.

It was believed that in order to ensure happiness for each month in the forthcoming year you should eat a mince pie for every month. Others went further by adding that these should be eaten at different households and made by different cooks.....at the rate I've been noshing on them that should keep me up there in the happiness stakes until ooh I don't know maybe 2016?!!

Sometimes dried rosemary was added to the mincemeat. This symbolised the rosemary bush that supposedly offered its branches up to Mary for her to dry the baby's clothes on when she fled to Egypt.

Eat a pie in silence.

Never cut a mince pie with a knife as this is bad luck and make sure you make a wish before you take a bite out of the first mince pie of the season. Don't refuse a mince pie as again you will be inviting bad luck...tough luck if you can't stand them!

Cromwell banned mince pies at Christmas.This may have been because importing currants had been banned in 1642 because they came from Islamic Turkey.

In Sussex the pies were baked in an oval shape with rounded corners to represent a cradle.