I am sure you will be delighted and thrilled to hear that today is National Poinsettia Day [at least in America it is]. Being a snouty old bird is always getting me into trouble- by and large I ignore poinsettias, but seeing a whole bank of them at the garden centre recently when meeting a chum for coffee set me off on one of my wonderings about them........

Poinsettias are a member of the spurge family and are indigenous to Mexico. They are named after Joel Roberts Poinsett, the first US minister to Mexico, who introduced them to the USA in 1825. 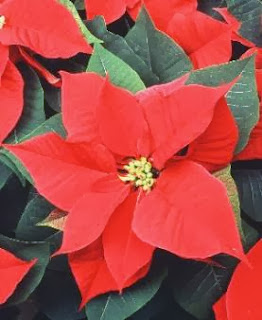 The Aztecs used them to make a reddish brown dye and for an anti fever drug but they came to be associated with Christmas in the 16th Century in Mexico where it is known as Noche Buena [meaning Christmas Eve]. It is said that a poor girl was advised by an angel to collect weeds from the roadside to lay at the altar to celebrate Jesus's birth because she couldn't afford a gift. From the weeds crimson blossoms sprouted which became poinsettias. The star shaped leaf pattern supposedly represents the Star of Bethlehem and the red the blood of Jesus at the crucifixion.

Nowadays they come in a wide range of colours and are known as the lobster flower and the flame-leaf flower. 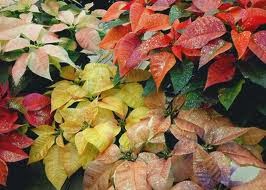 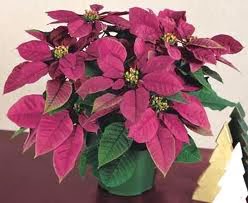 However, one will not be crossing the threshold- I don't do houseplants [well to be honest any plant really] as one look from me and it'll throw itself on its back with its legs in the air. I've already got a teenager and a cat so don't want the extra responsibility and worry thank ye!