Certain places are famous for the foods they produce- think Melton Mowbray as a classic example. Other places, although famous at a point in history, may have fallen by the wayside. Until recently I think it would be fair to say that my hometown of Horsham fitted into this latter category. I am delighted to say though that that is no longer the case.

We're talking the revival of the fortunes of gingerbread here. It was at the height of its production during the Regency period and at the time three varieties were available- the Parliament which was fat free with a very high treacle content, the Parliament Cutter which had crinkled edges and sold four for a penny and the Toy which was a hard and heavy type and would last for ages.

Below are a couple of the original presses- sometimes gold leaf was added to the stamp to give it that extra sparkle and luxury. 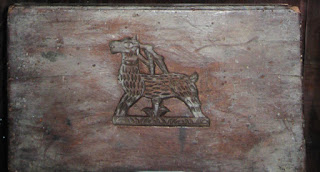 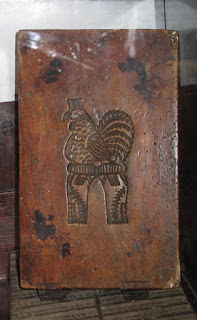 There were many makers in the town, each with their own secret recipes, including the forefathers of our local poet Shelley, but it died out with the death of the last maker, Mr Lovekin, in 1917. Thankfully for us the curator of our museum discovered a 200 year old recipe book at auction with the Shelley recipe in. For a year Lesley Ward, a local business woman [and my old boss from my Saturday job when I was 15!] who has a great interest in food set about resurrecting the gingerbread. She and her team spent that time experimenting until she was happy with the results. That was 2012. Since then it has gained a popular following and is now stocked in many outlets throughout the South East.The full story is here http://www.horshamgingerbread.co.uk/index.htm Such has been the success that Lesley is now busy adding other lines to the range. 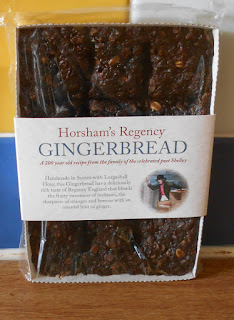