I touched on this briefly last week. Unusually for me I have raised my head above the parapet at Gnat Bottomed Towers and joined the No New Clothes Challenge For A Year being run by Jen Gale over at Make Do and Mend. This is quite rare for me as by and large I don't engage in the activities of other bloggers. I just keep writing my eccentric little bloglet and ploughing my own furrow. Very much like me in real life really- I am definitely one for standing on the sidelines rather than being centre stage.

During September I bought a few bits and pieces from a couple of charity shops to replace basics that were beyond repair. Another scarf might have snuck in [believe you me I have many] but that was 13th September and the intention [famous last words] is to not buy anything save for underwear or exercise kit until this time next year [only if I need them though]. I have already been tempted by a green scarf but when I worked out why it turns out I already have a necklace in the same colourway. I've been lucky to win a bag of long sleeved tops on freecycle which will be fine for working in and it won't matter if they get bleach spots on them. Beyond that we've all set our own rules and mine are that if I'm offered anything then I won't say no [a friend and I have often passed things over to each other as we're a similar size with overlapping taste] and I'm going to have a modest attempt to see if I can change anything I have that I don't currently wear. Don't expect miracles- I am no tailoress!

This is my first attempt- the jumper was given to my by said chum after her daughter no longer wanted it. I've been moving it around my drawers for a few months and I had put it out into the charity bag. However, I hoicked it out again and stitched the buttons on it which were given to me by a client a few weeks ago. I rather like it now even if it did take me several attempts to get the flaming buttons on evenly. 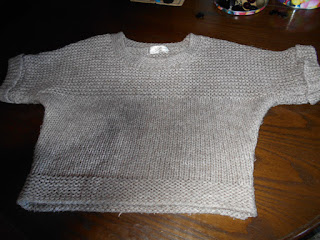 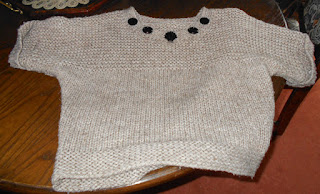 'Tis a start and I shall be interested to see if I learn anything along the way.