Life is full of seemingly unrelated little incidents but sometimes I find they seem to randomly collide within a very short space of time to form a coherent whole. One such example has occurred over the last couple of days.

Saturday saw me out dancing with Mythago once again. This time we were in Lewes which is a new gig for me [I danced at the Harvey's Brewery last Autumn].  Our first stand was scheduled for The Snowdrop which is at the far end of the town right beneath the cliffs. I had assumed that the pub was named after the flower and had given it no further thought until Friday when, unusually, my client's husband was still home. He used to live in Lewes and he asked me if I knew how the pub got its name. 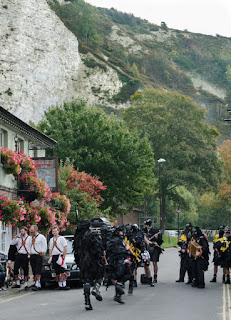 Sensing a story he told me about the Lewes Avalanche.  Despite prior warnings about the increasing danger about the weather conditions the inhabitants of the workers cottages in Boulders Row decided not to heed them. On 27th December 1836 tragically eight people lost their lives. The youngest survivor was a little girl called Fanny Boakes whose white dress that she was wearing at the time is now on display in Anne of Cleves House. The pub is built on the site of the cottages.

Chatting about this discovery with a fellow dancer she was able to add another footnote. We perform a dance called Triskele which, when we danced it at the Harveys Brewery last year, was recognised by the original composer [we had got his permission many years ago but with all the changes in the side over the years the original information had been lost and we no longer knew who had written it]. He came up to us afterwards and said how much he had enjoyed both what we'd done with it muscially and the dance. He very kindly endorsed our continued use of it. His version of the music is performed by the band he's in who are called Touchstone. They are a fabulous local folkband who have written many songs about historical events in Sussex. I've had a couple of their CDs for years. And their song for which this tune was written? "The Night The Snow Came Down" and it's all about Fanny Boakes. This track is so familiar to me yet I had never thought to find out what it was about. Small, small world. Let me leave you with a recording of it.