Several months ago I received a text from chum E asking me to get her a cantilevered sewing box from a charity shop should I ever spot one on my rummages. Now I had no idea even what one of them was but dear old Google soon put me right. 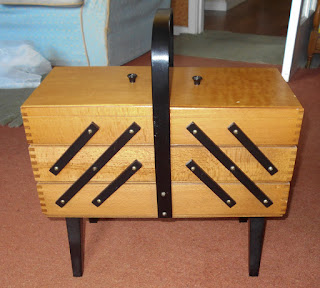 Time passed but eventually I spotted a likely contender when I was dashing in and out. Noting the price I simply sent her a message to say I'd found one and where it was if she still wanted it. Within half an hour I'd had a reply to say she'd got it. No mean feat considering she lives outside the town on the far side...her daughters were a little bemused as she simply stopped what she was doing, leapt in the car and zoomed off without a word of explanation. Good deed done.

The photo however, is not of hers it's of mine...won this week on freecycle. I had bid on a couple of sewing boxes over the years but never been lucky. Strangely though I remained quite convinced that eventually this would change....I am delighted to say my hunch has proved to be right and it's now sitting proudly in my front room full of sewing notions.