"Look Mummy...the walls, they're falling down!"

Aged two, those were the words my son uttered to express his amazement at the huge ruins of Corfe Castle towering above him. I must admit that I had a similar thought on Saturday when out walking with my friend E.  West Sussex is, by and large, a fairly wealthy county and when you potter about in the countryside you generally [not always granted] see beautiful old houses which cost a pretty penny and are well maintained. It's the living choice of many famous souls who want to claw back some privacy and escape the spotlight of London.

It came as rather a surprise [not in a bad way I hasten to add] to find the polar opposite around the small village of Shermanbury. Once the grounds of Shermanbury Place the area has been left to be reclaimed by nature.  I found there to be a gentle beauty  in the tumbledown and faded elegance of the abandoned sites we found. 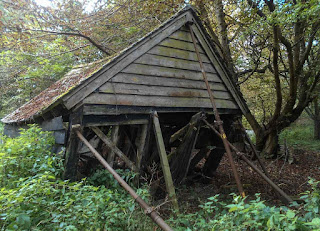 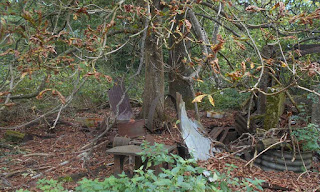 Delving deeper into the woods we came by a rectangular pit with steps. Both of us thought it most probably been an outdoor swimming pool originally [I now know it was a pool built by the Canadian forces], but now standing empty it's home to the zesty coloured Orange Balsam. 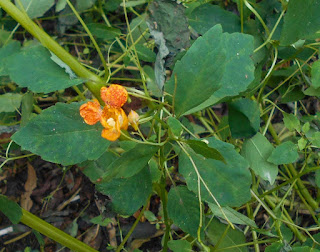 Further on we came to the church. Again it's seen better days. It doesn't hold regular services and is kept locked due to repeated vandalism. The churchyard gave me my first view of a metal grave marker. 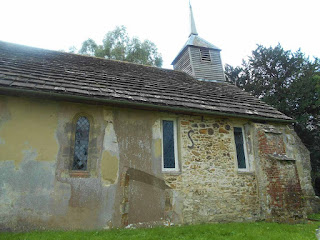 Yet more in the same vein next door. The cars may have been there some time I feel! The property has been empty for years according to E, but there were signs of rejuvenation as scaffolding has recently been put up and there's building materials in view. This is the stable block, as the house itself is hidden from the road. 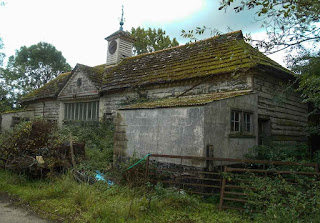 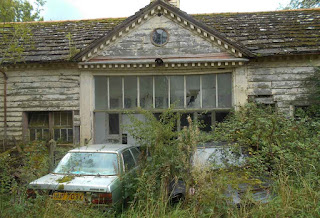 It was rather appealing to end our walk with the realisation that we were being observed in the far off distance. Conversations about what the herd were only became clear when we noticed the long necks...alpacas I do believe!