Taking it in his stride.

The text message from TYM on Saturday let me know that he'd arrived safely at the British Universities Athletics Championship. Having wished him well [he got a PB in the end], I informed him that his weird parents, as part of Mythago, were going to be filmed for a sequence in a horror movie👻 . His response didn't garner quite the response you might expect.....


"Nothing has changed there then!"

If I were him I think I might be a tad more concerned that I had inherited my genetic make up from these two! 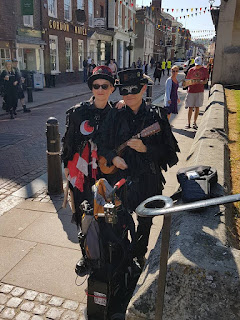 Having reached the milestone of being together for 28 years on Friday, here's my partner in crime debuting his new mask at the Rochester Sweeps Festival on Saturday where he played out at a public event for the first time. The photo was taken by my friend Buzz who has kindly given me his permission to share it. There won't be many in the way of Morris dancing photos now Mr GBT has defected from being a groupie to becoming a Mythago musician.