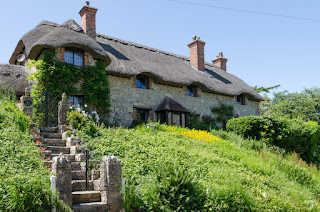 Aah a lovely thatched cottage....doesn't that just make you think romantically of chocolate box villages. Even better if it's got a "something" on it....in this case a squirrel on the Isle of Wight. 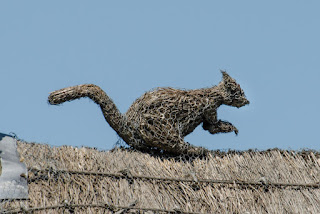 Historically this type of roofing posed a great fire risk, especially in areas of high population density and it was banned completely in London in 1212 for this very reason. There is however, a rather famous building with a thatched roof. When The Globe was rebuilt it took them eight years to get permission to build it with this roof and even then it was only on the proviso that they had a water sprinkling system fitted within it. Probably sensible, as our tour guide told us that the original one burnt down after a rather over enthusiastic prop man let off a canon during a performance of "The Merry Wives of Windsor"....the roof caught alight and the rest is history as they say!