I may just have mentioned a gazillion times that I'm a Morris dancer....the one thing that is different about Mythago is that we perform myths and legends. One story is Herne the Hunter, but we haven't been able to do it a while because the original white hart went awol and never returned. Eventually I decided to ask for any willing volunteers in the side [we have some really talented people] to help me make a new one as frankly I wouldn't know where to start!

As ever the side came up trumps and I spent a couple of hilarious afternoons back in the warm weather bent over double with laughter as I and L got sticky up to our elbows manhandling glue guns and some purple stuff that is used to make casts for broken limbs. It's a pickle to use because it gives you about 2 minutes working time from the minute you open the packet and wet it before it sets like concrete😀 For a while it was known as the "purple moose" and it sported a mismatched pair of yellow and blue pingpong ball eyes...L just pinched them from her cats toys!! Once the basic construction was completed I gladly stepped back and L unleashed her artistic talent to create a rather fabulous replacement beast for us.


I was lucky enough to be the white hart for its inaugural outing at the tree dressing event at the Weald and Downland museum yesterday [you might recognise the place as it's where they film "The Repair Shop"]. L asked if we could take a few shots as she couldn't be there to see it, but am happy to say she'll be wearing her handiwork at Stonehenge when we dance there on 21st for the Winter Solstice. 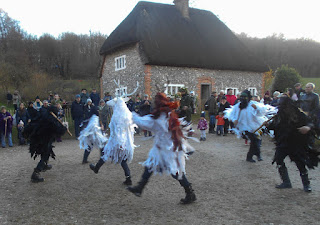 This was the official one...but there's always one naughty peep who decides to photobomb and here's the evidence😈. 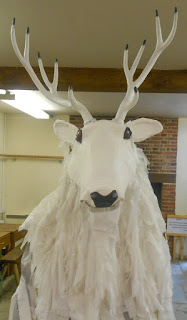 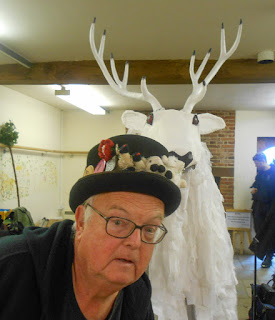 Next on the list for replacement are four masks which have worn out [they are 20 years old] so four of us are getting together after Christmas to start on them.....should keep me out of mischief! Until tomorrow.....