The turning of the Old Year

Being a Druid I'm much more about Yule than Christmas really. We're fast approaching the Winter Solstice when the traditional battle for dominance over the part of the year when the light returns is fought between the Holly King and Oak King. The Holly King has reigned supreme since the Summer Solstice and dominated the months as the energy of the old year wanes, but as they once again take up arms the Oak King will emerge triumphant with the waxing of the fast approaching Spring.

Currently Mythago is preparing a new story around this very theme and we are now starting to finetune it. It's all happened rather unexpectedly and at lightning speed so we're going to have to improvise a bit this time with suitable kits etc. No doubt there will be more tweaks further down the line. The part of the Lady requires two circlets to denote her changing roles in the two seasons. One of us already has a floral headdress for the summer, but there was some talk of maybe weaving an ivy one for the Winter bit. However, the money saving habit is so ingrained in me I simply couldn't bypass the Christmas door wreath festooned with pinecones, mistletoe berries and fake evergreens I spotted in a charity shop. To my weirdly wired brain it simply screamed Winter headdress and there's nowt like a bit of upcycling is there. I parted with my two shiny pound coins gladly and removed some of the foliage to thin it out a bit. It's been snipped and had velcro stuck on so that it can be fitted to the wearer's head. It will get its debut when we have the privilege of dancing the story out within Stonehenge on the 21st December.

For a while now I've wondered whether there were any specific Yule decorations that I could display on my little shelf where I keep a changing display as we move round the Wheel of the Year. I am pleased to say that I've found some handmade ones, so I've invested some more of my remaining birthday money in this Father Yule. 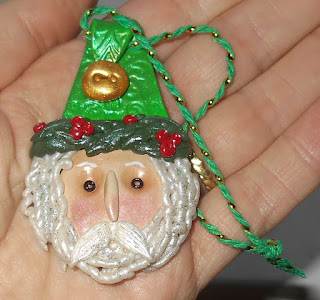 Sometimes I find this time of year a little heavy on the schmaltz side so in the interests of balance and light/dark Krampus has also come to join me. I blogged about this folkloric figure back here  http://gnatbottomedtowers.blogspot.com/2015/12/christmas-cheer-vs-christmas-fear.html 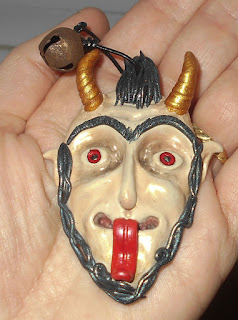 Santa's evil twin is growing in popularity and there's now an annual Krampus Run in Whitby. In reality it's a parade and raises money for charity. Here's a video of the most recent one...don't have nightmares!