First new day of 2020 and our first mini meander. I had to try and make our New Year's Day a little more thrilling than me catching up on the ironing and going out to buy more milk somehow didn't I!

With lots of new developments springing up around us some of them now have official village names. Highwood Hill is the latest and we thought we'd take a quick walk out to see what's what.

We pass this "Mare and Foal" quite often on our way over to Tesco if we're going there on foot. It's the work of Marcus Cornish, but doesn't really fire my imagination. In what is rather an executive/exclusive area I like the fact that somebody has cheekily added the Santa hats and probably lowered the tone by several notches! On what was rather a colourless day the red bushes in the border really added a zing to the scene. 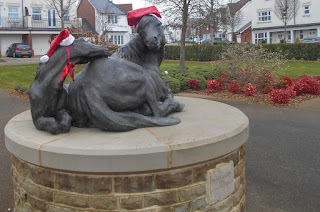 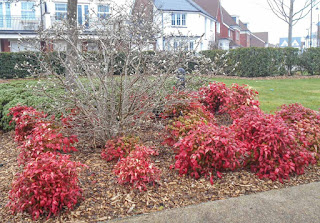 This is my first encounter with a truly public piece of work. The block of Portland Stone was paid for by the builders at the start of the year and then the sculptor, Jon Edgar, worked in conjunction with members of the public to make the piece. He used their stories as a starting point and then taught some of them basic chiseling skills so they could literally make their mark on the piece [under his watchful eye no doubt!]  The carvings are all rooted in the history of the area with a nod to the medieval fulling wheel and mill shack which once stood in the vicinity. He's also incorpoated some of the local wildlife with the heron, duck, pike and owl. I wasn't sure what the hand grenade thingy was, but I am guessing it's the rather oversized blackberry the online notes refer to. Honestly I can be such a philistine at times😀. A competition was held to name it and Fluvius" was chosen. It's Latin for streams and running water and makes a nod to the River Arun which is a stone's throw away. 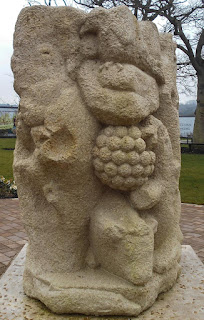 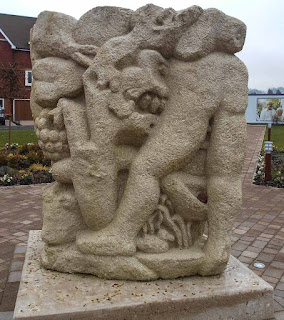 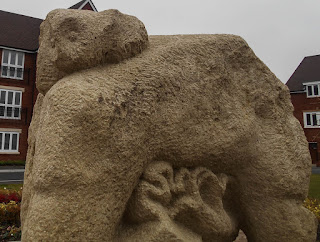 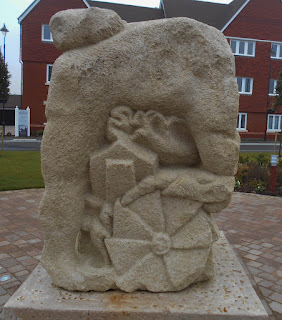