There's something to be said for staying home more....it means I start poking around and starting lots of projects with an ever extending list of other things to attend to. So far in 2020 I have freecycled 8 jigsaws to two new homes, a set of divination cards that have been winking at me for 15 years, but I don't actually like the artwork of and there's a charity shop bag full of clothes which either don't look right on me/don't fit/don't work with anything else waiting to go before the end of the week. I haven't actually started sorting anything out as yet!

One of the positives of this sudden rush of New Year activity is that it saves me money and gives me lots of new ideas. From my scarves I have realised that I rather like the effect of twisting two individual ones together to wear as one. I haven't really worn them separately before. One or two corners have been cleaned too which has made me think laterally. The leftover sage leaves from a batch of soup I'd made and now hiding away in the veg drawer got fried and added to the top of a veggie layer thing we had for supper at the end of its cooking . They added a rather pleasant crunch on the top and Mr GBT ran with my suggestion for using up the fat we had saved from the Christmas dinner to make these. 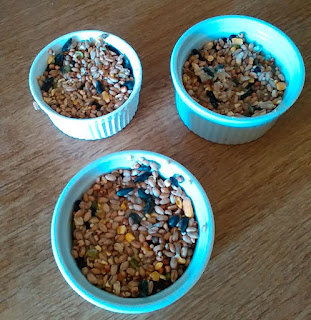 Our own homemade take on fatballs. Our avian friends can be fussy little beggars in these parts [something to do with being spoilt for choice in the gardens round here I suspect!], but I am pleased to report that I have seen a bluetit stuffing its beak.

However, to balance all this worthiness out I do have to confess that it was necessary for me to throw away a margarine pot full of Mr GBT's homemade sausage rolls because his wife absentmindedly put them in the cupboard and not the fridge. They were not rediscovered until several days later....always a work in progress😏 with room for improvement. Onwards and upwards!