Weirdly I wonder if it's possible to experience font envy? Lots of people posting up pictures of the incredible carved fonts they've seen in churches around the country have made me rather envious of their finds. Obviously this is all meant to be taken very much tongue in cheek, but in the main any ones I've seen tend to be pretty non descript.  Either Victorian or very plain like this ancient tub one which was rescued from a nearby ruined chapel and now lives in All Saints church, East Meon in Hampshire. 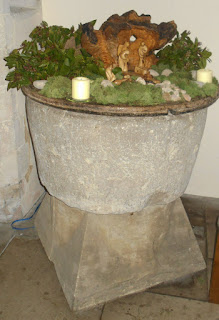 However, All Saints is rather spoilt for choice when it comes to fonts because it also has this rather natty 12th century one which is believed to have been gifted by the Bishop of Winchester Henry de Blois [he featured in this previous post http://gnatbottomedtowers.blogspot.com/2019/10/the-alternative-tourists-guide-to.html] who was also lord of the village manor. 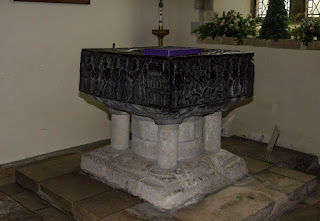 This is one of four Tournai fonts to be found in the county. They take their name from Tournai [now in Flanders] where the dark polished limestone [not black marble as it would appear] is mined. It has the most incredible carvings and the dragons were very much like the ones we saw on our trip to Norway.  We're not that many years on from the Norman invasion and the men descended from the Vikings at this point in time. 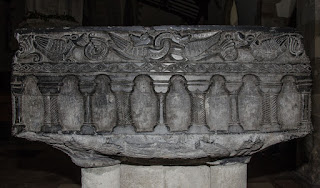 This side shows God on the right hand side of the panel creating Adam with the devil depicted as another dragon. 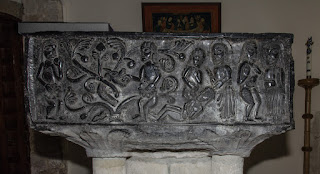 And here having been ousted from the Garden of Eden Eve is being taught to spin and Adam to dig. 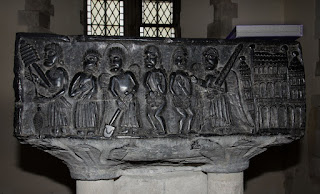 I now realise that the photos I took in Winchester cathedral [unshown here] back in the autumn were of another of the fonts in the set. That one was not quite as elaborate, but the workmanship was very similar and I would guess made by the same hand.

All Saints church itself is magnificent anyway. We were on a tight schedule so it was a 15 minute drop in before we went onto to visit family. However, even in our short time I was able to appreciate the beautiful hand stitched kneelers and the Millennium Embroidery. I'd have like to have stayed and taken more photos, but I'd promised Mr GBT that I'd stick to the agreed time slot so only had time to take these before we resumed our journey. 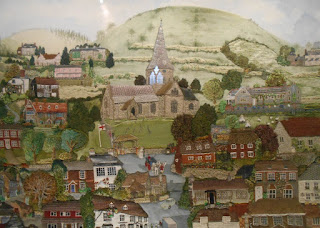