How to advertise your services 17th century style.

You know when you get work done on the outside of your house or in your garden the company doing the work might offer you a financial incentive to continue displaying their sign for an agreed period afterwards. The neighbours next door had their drive done in March and within days the people across the road and two other sets had followed suit using the same people. It can't have been as easy back in the 1700s when it was physically slower to travel to different places and without access to immediate forms of communication. Even word of mouth must have taken its time! Nevertheless where there's a will there's always a way and the builders behind the tower of St Margaret's church in 1700 found it.

This charming church in Ockley, Surrey is estimated to have been built in c1290, but has undergone several transformations over the centuries. 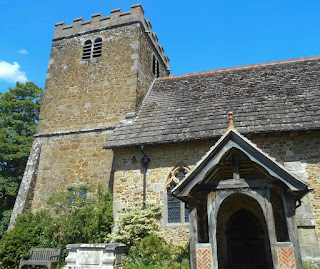 The tower was completed in 1700 and it was with much excitement that I noticed some very prominent graffiti on the outside when we looked at it on Sunday. Some of it was quite high up and I wondered how on earth they had managed to get up to that height to carve the names into the stonework. Mr GBT kindly took some photos for me to allow me to see if I could find out a bit more when we got back to GBT. 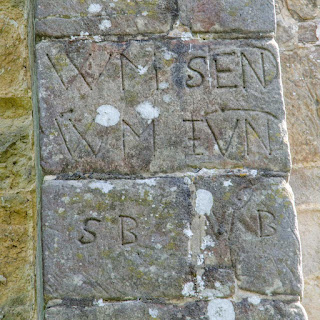 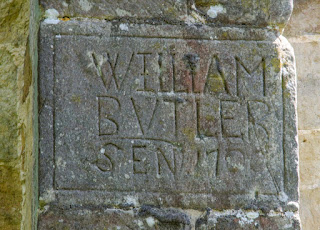 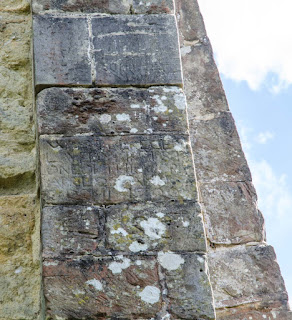 As it turns out these weren't the naughty scribblings of vandals. The top, barely legible example records that the foundation stone was laid by W Steere. The other much more prominent examples show the father and son who built the tower....so if you were looking for builders in 1700 perhaps Messrs William Butler Senior and Junior might have come highly recommended. It's rather touching to find that some 300 years later I can find out the names of those behind what I am looking for. History rarely tells us the names of the everyday people.

Obviously we couldn't have a snout inside, but other small points of interest are that the tower houses a set of bells cast at the Whitechapel Foundry in 1701. It's rumoured that the biggest one was the model for the American Liberty Bell. Also of note is that the herbalist Nicholas Culpepper was baptised here in October 1616. Sadly his Father who was the rector at the time had died only a few days earlier. Another charming church tucked away from the modern village's main settlement.