My 2020 diary pages tell me that 28th May was TYM's final exam, 29th was our friends' J & S's wedding followed by a celebratory pub meal [note take day off work] and the 30th was their party with hog roast in their woods for their wider circle of friends and TYM's 22nd birthday. Of course, as we all now know too well everything has been turned on its head.

As with the previous 3 birthdays TYM was due to still be up at Chester uni...my expectation was that he would be nursing a sore head following an enthusiastic end of term drinking sess [or seven!]. Instead here he is at home with us as he has been since the week before lockdown, uni finished and already having got his degree. Yesterday he sensibly decided that he would take the day off from his delivery job to kick back and relax. It was a lowkey day for him, but he enjoyed a few beers that came his way via a couple of the local breweries....I also understand he's spent his e-vouchers on some new threads. Thankfully Mr GBT managed to track down some more flour last week for me so I was well stocked with baking supplies....voila one coffee cake with crunchie bar on top. It felt really good to bake properly for the first time in months....not much left now mind you! 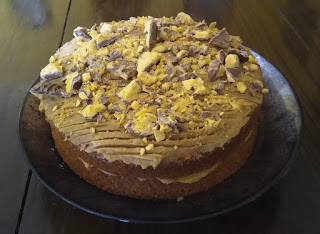 My friends' wedding has had to be postponed until May next year. I dropped them a little message on Friday morning just to check they were ok. J said it felt "strange" and at that point I made the decision that I would press on and give them their wedding gift anyway. Might as well spread some cheer if I've got the chance to. Now this is not my normal sort of purchase when it comes to gifts of this nature, but if you saw this couple's home you would see that it's very much in keeping with what they already have. I bought it weeks ago when I just happened to see it and thought it would be right [at least hoped so!] for them. It's rather out of my comfort zone in all honesty, but it's quite fun when you switch it on because the crystals change colour and you have an incense cone burning in the top. 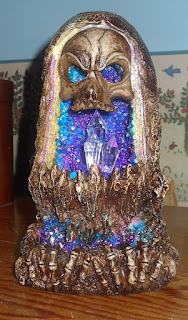 I dropped it off on their doorstep yesterday morning before we set off on our walk [details tomorrow]. By the time I returned to the car afterwards I'd had a lovely text saying they both loved it and how "cool" it was. I can honestly say that is the first time and probably the last time anyone has ever described anything I've done as cool....I was just relieved that I hadn't horribly missed the mark!