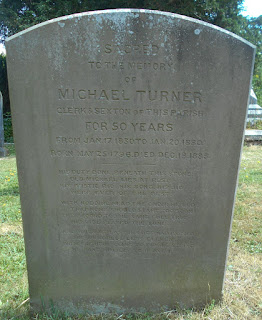 Michael Turner [1796-1885] was born in the Sussex village of Warnham. The son of a farmer, he chose shoemaking as his profession, but that was never his main passion and it was mainly a means of topping up his income earnt as the clerk and sexton of the parish church. His gravestone records his endeavours


"His duty done, beneath this stone,
Old Michael lies at rest.
His rustic rig, his song, his jig
Were ever of the best.

With nodding head the choir he led,
That none should start too soon.
The second, too, he sang full true,
His viol played the tune.

And when at last his age had passed
One hundred- less eleven
With faithful cling to fiddle string
He sang himself to heaven."

The dedication might be a tad on the contrived/sentimental side for today's taste, but it does give a sense of the man and his life. Let's just say he was what can only be described as a "local character". He was by all accounts a very dapper fellow who always wore the traditional white Sussex smock with an old fashioned high beaver hat, long boots and a red neckerchief to perform his duties on a Sunday in church. He sat up in the rood loft playing his violin, whilst singing and keeping an eye out for any shenanigans in the choir. Bad behaviour was not tolerated in any shape or form and he was known for frogmarching any misbehaving urchin from the church regardless of what point they were at during the service. He wasn't above literally banging the choirboys heads together if they had upset him either!

Beyond his church role Turner was an accomplished bellringer and was often in demand for his singing/fiddleplaying at parties and village fairs. Sadly ill health stopped him from being able to work and he spent his final years in poverty. His friends and local parishioners paid for his headstone some years after his death and his beloved "viol" can still be viewed inside the church. However, I did find that he left an appropriate musical legacy....I have heard a few local folk musicians talk about "Michael Turner's Waltz" [actually composed by Mozart] and have only just clocked this is one and the same man. Mr GBT already knew this, but it's obviously a conversation we've never had! A local clogging side dance to it and it's performed by one of the handbell teams near to here. It's here if you fancy a listen https://www.youtube.com/watch?v=35pu-YHb8EI