We passed by St James in Shere a couple of weeks ago and much to my delight I found it has recently reopened. I'd heard rumours of a possible connection to an anchorite, but these things are usually pretty vague and with little detail about the individual who had chosen to be sealed within a cell. Most were women and it was a practice that ceased before the Reformation. Bar one or two who made a name for themselves, history has not recorded their names.
The first photo shows the remaining outline of the original cell which was 4' wide and 6' high. It's sited on the north wall of the church i.e. the coldest part and would have had some kind of aperture to the outside world where people could bring the occupant food and drink. Unusually it's known exactly who lived here. Christine Carpenter [her father William was the village carpenter] for records of her exist in documents held by the Bishop of Winchester under whose jurisdiction she came. She was first enclosed in 1329 and then for reasons unknown she sought permission to leave before she went back in in 1332. The quatrefoil [complete with apotropaic marks] is where she received the bread and wine and next to it is a hagiosphere which would have allowed her to observe the high altar. 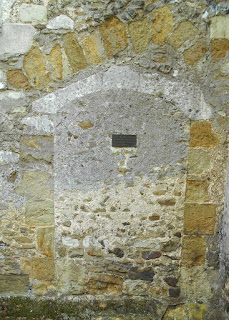 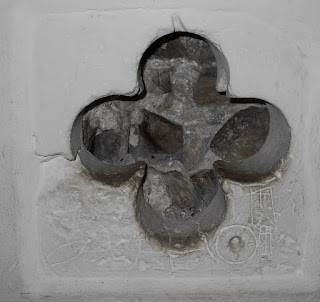 I idly wondered what life would have been like being shut away like this. No doubt it would have been hard and austere, but seen in the context of the living conditions of the time perhaps it wouldn't have been terrible if you were getting enough to eat and your body wasn't being wracked by hard, physical labour or being constantly pregnant. A friend signposted a recent Radio 4 series on isolation which touched upon this very subject. It concluded much the same as me...the church was back then the central hub of the community and you would have seen and spoken to many people who would have sought your spiritual guidance. One little detail I loved was the revelation that in one place there were three anchorites in adjacent cells and they had a pet cat🐈 Some even had servants! It provided a fascinating insight into this chosen way of life.
Arilx
at October 27, 2020