Sunshine on Saturday meant walking plans could go ahead with friends P & C. We'd had to put our meet-ups on hold for a few weeks, but now that we're allowed out to play again.....

Frankly I spent most of the walk gassing and not paying that much attention to my surroundings.....even this tangerine coloured fungus only came onto the radar when one of the others pointed it out to me! Not exactly easy to miss now is it!!

However, this double bridge was just about obvious enough for me to notice.  It was decided by the Board of Trade that the original brick one left too steep a gradient for the train to have to ascend to the nearby station. Before the railway could open it insisted that the embankments were raised to give a gentler incline and the iron girder bridge was built above it. This apparently makes it a unique example of Victorian engineering and I'm sure the change must have averted some potentially tragic accidents. 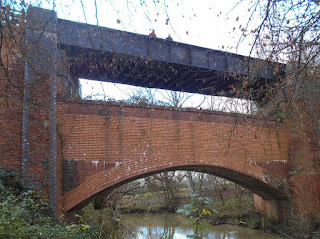 The railway line was axed by Beeching in 1966 and since 1984 the old railway lines have formed part of the Downs Link for use by cyclists, walkers and horse riders. Over time it's seen extensions being opened and you can travel all the way from Guildford town centre in Surrey down to Shoreham on the West Sussex coast. I've walked more of the local bits these past few months than I have in all of the preceding years and it's been a godsend for many having it on the doorstep.
Arilx