It's easy to miss lots of those little moments that occur in our daily lives when so many of us [myself included] are often distracted and thinking about other things. Last Friday as I sat waiting behind a large artic lorry to turn right at the junction when I thought I saw the word "jaffa cakes" on the back of it. "Don't be ridiculous" my inner dialogue ran, but then I noticed a tiny sign tucked away at the base of it that read "There are no jaffa cakes left in this vehicle overnight"....it did make me smile as it would normally not have been visible.
I was actually on my way to meet up with my friend WW and have a short walk round Slinfold. I've featured this village many times so won't repeat previous images. This was the only photo I took because I liked the novel approach of training the shrub to grow up over the gate. What I was pleased to discover though was that Edward II was said to have stayed in one of the local farms [called Theales] in September 1324 on his way home after being at Battle Abbey...it makes a change from Elizabeth I who seems to have managed to sleep in just about every bed in the country during her Progresses if all the claims about her are to be believed!! 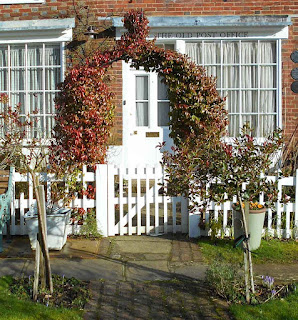 WW has a new kitten and under normal circumstances I'd have been over there like a shot meeting Luna, but as everyone knows that's not allowed for now and she's too little to be let outside. To resist temptation we thought it the better option to park out rumps on a bench for a few minutes to give me a chance to see some clips of her antics on the phone [shinning up the curtains being one of them]. In that time a couple of little boys stopped to say hello to us [their parents were near] and one was bursting with pride as he told me proudly that he had a new bed. I love the information little people share....his Mum rushed over to apologise for him bothering us and to explain that they'd only moved house the day before.....I reassured her that he had helped make my afternoon [along with that well known combination of kittens and jaffa cakes😆]
On what was due to be a pleasant, but nothing out of ordinary [novelty and spontaneity are not that easy to achieve right now] afternoon these small things that I paid attention to added just that little sprinkle of magic to help turn it into another special time spent with a very good friend.
Arilx