Although my home town has seen many changes over time it has retained a goodly handful of its medieval buildings and alleyways. Going along these twittens [as we call the passages in Sussex] you really get a feel for how little space there would have been between the building on either side. I like them all, but this short one I find particularly charming. From one end you wouldn't even guess it was there because it's tucked behind a high brick wall alongside some modern houses and this is the non too prominent entrance at the other....it doesn't exactly scream public access at you does it! 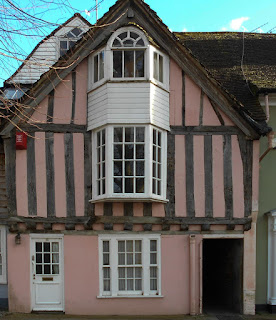 Being only of average height I can only ever see the top of these two pre Victorian "follies" [they were tile hung later on in the 19th century] over the garden wall which are part way along.  Looking online for a little more detail about them they are more accurately described as two summerhouses with glass greenhouses running between them in the middle. 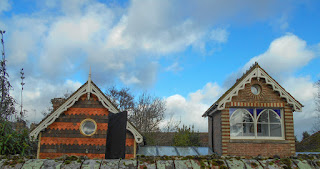 These two houses are the star turn for me though. I absolutely adore clapboard houses and even spending two weeks looking at lots in New England many years ago didn't lessen their appeal. These ones are late 18th/early 19th century and were built by a local builder called John Morth. He was so local in fact that he actually built them in his own garden for his daughters and the twitten is called Morth Gardens in his honour. 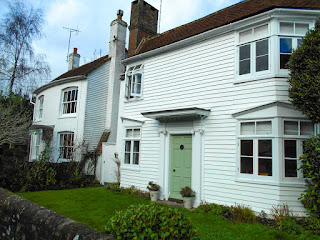 It amazes me still that this is slap bang in the middle of the town, just off the conservation area around the parish church. I have lived here since I was 10, yet I had no idea of its existence until my Dad took me down it one day when we were out for a walk.. it's always stuck in my memory because my own son was still a very young baby and in his pushchair with us. It never ceases to delight me like it did that first time and is my absolute favourite spot in Horsham.
Arilx