As it's well documented, the golf courses are shut for now. With this in mind E and I had a snout round her local one hoping to spot some wildlife. What we didn't expect to find was so many remnants and reminders of WWII there.

Not one, but two pillboxes in close proximity. The square brick one is bulletproof and is a type 26. It was deliberately built into the river bank to partly camouflage it and to build an anti tank ditch. There were no visible signs of people having been inside it and I've since learnt that it's only been emptied of soil within the last few weeks. The hexagonal one is a type 22 and came with five openings through which rifles or light machine guns could be fired. There was plenty of graffiti scrawled on the walls inside, but E did well to spot this contemporary piece in amongst it all. This was written just a few weeks after the war had ended and I wonder if Gordon Bullock from Carsdale, Manitoba, Canada was one of the soldiers from the Canadian troops that were stationed in the area. I shall probably never know! 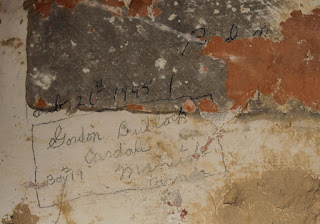 I have to say E was on fire on Saturday with all her spotting...this is a regular route for her with the dog and she's been wondering about this bridge and whether it was another war relic. From footage I've seen it looked vaguely familiar to me and I couldn't resist put the word out on FB to see if her hunch was right.

Well the local war history enthusiasts came up trumps and confirmed that it was a small box girder bridge which was built in 1940.It was designed to be carried on the front of a Churchill AVRE tank so that it could be transported to different locations and then used to cross different obstacles like streams. They were used in the Normandy landings. It seems to have been sitting there quietly with its later wooden top unnoticed until now and people were interested to hear about it.
This memorial though is the reality of the war...on 17th February 1945 a loaded Halifax Bomber caught fire and crashed. Tragically the pilot and the bomb aimer lost their lives. 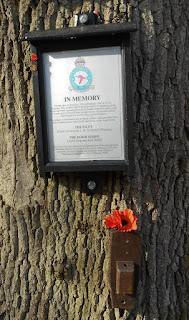 A poignant reminder. Until tomorrow.
Arilx
PS Now have had it confirmed that the bridge was made by the Cleveland Bridge and Engineering Company in 1940 and is a markIII.