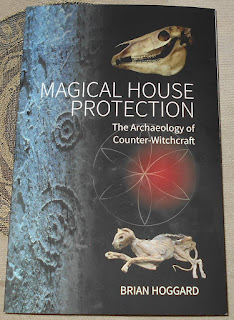 Obviously the last post was my own take on an April Fool joke. Weirdly it wandered into my head fully formed when I was cleaning a client's shower on Tuesday, I was particularly pleased with the Equus Unicornis which I had claimed as an original only to find that some smart Alec had already beaten me to it!  I'm not a complete fibber though as there was a mummified cat found below the steps in recent times which is now on display in the museum. It's significance lies in the evidence it provides of folk magic practice continuing well into the Victorian era. This is backed up by other examples in my newest book on this very topic. Its a fascinating read and Brian Hoggard set up the related website if you are curious http://www.apotropaios.co.uk/

PS As a completely unrelated aside Smart Alec derives from 1840s New York conman Alec Hoag. He and his accomplices ran a set up called the Panel Game which allowed prostitutes and their pimps to rob clients. The rooms out of which the trick was carried out had sliding walls which allowed Hoag to sneak in and steal valuables whilst the victim was asleep.