Not magical tales of imagined folk, but real people after whom the woodlands on the Nymans Estate have been named.

Hard as it is to read the first one is Pookchurch Wood. I can't find much online about him, but Reverend Pook was known to tell Bible stories to anyone that would listen from the raised dais that projected out from one of the natural sandstone outcrops.  It's become known as Pook's Pulpit and there is now an ongoing project to record the built up layers of graffiti that cover it. Some of it dates back 300 years, but it's thought that there are probably carvings that are even older. Due to its delicate nature people are asked not to touch it, but the National Trust has created a 3-D model of it for anyone who's interested [me! me!!] 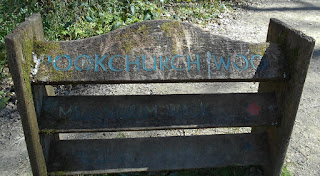 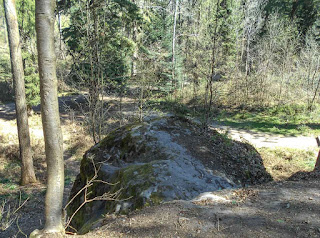 https://sketchfab.com/nta.lse/collections/nymans-pooks-pulpit-segments
Now this second board should read "Jack Reeding's wood", but I have inadvertently missed off the first letter. Mr GBT and I were wondering who this fellow might have been. My bet was on it being the estate gamekeeper....but no. His real name was Jack Rigging and he was a rather unpleasant 18th century highwayman who relieved people of their valuables as a profession. He used to hide out in one of the disused quarries in the wood until the law caught up with him and he was hanged outside the Red Lion pub in the village of Handcross where Nymans is situated.

It's hardly the stuff of Enid Blyton's "The Magical Faraway Tree" is it!! More tomorrow.
Arilx