William Corder was not a pleasant chap as his lover and mother of his child, Maria Marten, was to find out to her cost. He took her life and then buried her in the so called red barn [due to its colour at dusk] where they had met up for their trysts. He'd lured her there on the promise that they'd travel together to Ipswich where he would marry her and thus stop her from being arrested for having children out of wedlock [she had already been abandoned by previous lovers when pregnant with their children] as the law stood in the early decades of the 19th century. She laid undiscovered for a year whilst Corder lied to explain her absence before his crime finally caught up with him. Without an alibi he was sent to the gallows in Bury St Edmunds and then onto the anatomist, Dr George Creed's table within the hour. In 1828 this was the standard treatment of a felon's cadaver, yet demand far outstripped supply and people had to face the very real fear that the bodysnatchers might steal their newly buried loved ones.

Aside from the salacious interest in the case at the time it's how Corder was treated post mortem that continues to generate interest. The remains of anyone who had been executed were quite deliberately treated with dispassion and intended to cause public humiliation of that individual. Ultimately it was thought that such actions would deter future criminals. Several casts were taken of his head which were then pored over by the pseudo scientists of the day to see if he had the physical features that would prove that he was predestined to commit such acts. Thankfully such bunkum [or phrenology to give it its formal title] is no longer credible. Although this type of thing would have happened to many, the main difference here is that some of the kept trophies have survived and are now on display in the very town where this man's life ended. They are exhibited in a designated case in the Moyses Hall Museum. Below you can see the death mask, the murder weapons, the preserved scalp and the book about the trial bound in the skin which was removed by Dr Creed and was originally added to his private collection. 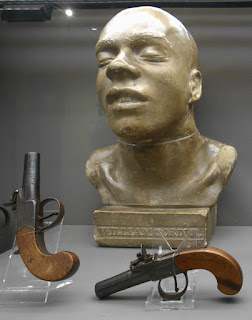 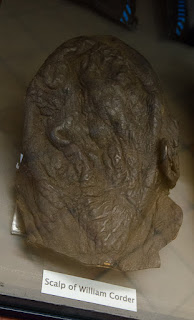 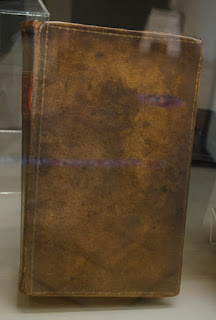 Whatever one's personal feelings about such matters they are of interest because they record the attitudes of the time. Originally the skeleton was donated to a hospital, but it was eventually cremated in 2004 and the whereabouts of the ashes remain undisclosed.