Oops did you spot my blunder yesterday....I got my dates muddled and managed to accidentally schedule two posts for Monday instead of one. As a result this is a little extra one I'm popping up. 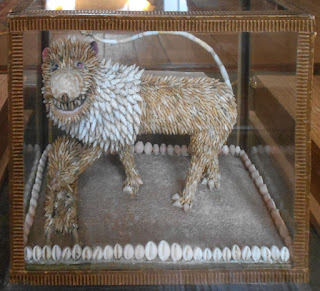 Well it's one thing to do when you find yourself with a load of shells in your craft cupboard. Surely this has to be the least scary lion in the world🦁 I thought he was rather hilarious, but I think that many people might miss him. This little 18th century Scottish one lives at the bottom of a glass cabinet at the back and facing away from the way most people walk. It's one of the many treasures to be seen at Parham.
On a related shell trivia note the company of that name was so called because its founder, Marcus Samuel, started out selling painted shells as part of his first business.🐚
Arilx