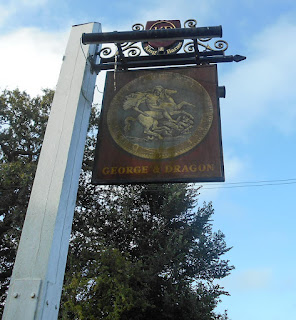 This local pub is more of a gastro affair these days [that's Sussex for you!], but back in the 1970s it was a traditional watering hole and a place apparently where people indulged in a spot of "dwile flunking".  You know when you see something written down and you have absolutely nothing to hang your hat on for a possible explanation. Well that was me...I literally had no idea what people were referring to. Now I know it to be a harmless bit of fun in which those who had [most probably supped a few pints of ale] participated.
Rules- one team would hold hands in a circle [k/a girting] and go round a member from the opposition [the flonker] who was stood in the centre with a long stick [k/a driveller] which had a beer soaked cloth on the end [the dwile]. This person would go round in an anti clockwise direction whilst trying to flonk all present with his dwile. If it missed it was a 'swadger'. The team who got the most points was declared the winner, but would have a point deducted for any member still sober. It's hardly surprising that the recollections of such matches tend to be a little hazy then is it!! The rumour was that this sport had been an East Anglian harvest game, but the truth is that it came from the fertile imagination and much missed Michael Bentine in the 1960s. There was an attempt to revive it, but this was thwarted by Elf and Safety regs so a memory it must remain. I shall never know how good a dwile flunker I might have been given the chance!
Arilx
at August 31, 2021