Sending out an SOS 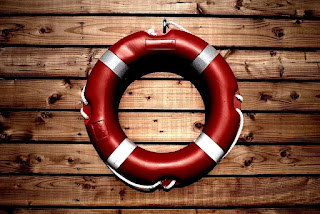 {image from Pixabay}
Whilst I understand what SOS stands for I have to say that up until now I have been rather stumped by why we say Mayday, Mayday, Mayday in an emergency. The former distress call is rather going out of use as Morse code has rather fallen by the wayside.  When reading a book about some of the famous people of Sussex last week I finally had my answer.
Frederick Mockford started out as a Morse code operator for the railways and then served in WWI with the first wireless unit. He continued to pursue a career in wireless communication for the civil aviation ending up at Croydon Airport as a senior radio officer. When asked to identify a word that could be easily understood internationally as a distress call he suggested the word "Mayday" derived from the French "m'aidez". It was officially adopted as the SOS replacement at the International Radiotelegraph Convention in Washington in 1927.
And I need wonder no more!
Arilx