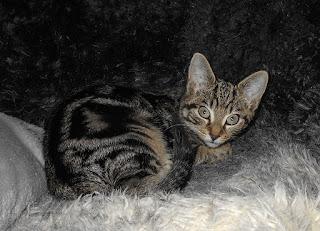 This is Luna...my very good friend Witchy Woo's little cat who's just had her first birthday. She's a busy little bee and the last couple of times I've been over she's been chasing or has been being chased by a chocolate brown, long haired cat called Albert. Now this might not sound a very good situation, but Albert is the same age and lives next door. They are thick as thieves and call round for each other on a daily basis for extended bouts of rough and tumble in the garden...no claws or teeth just lots of fun [both have had their little ops!]. It's quite an unusual scenario as Luna doesn't tolerate any other cats coming in the garden, but WW thinks it may be something to do with the nature of the breeds of the two of them. She's half tabby/Siamese and he's half ragdoll/ British blue. Anyway it's the cutest thing to see and when they've tired each out they both return to their respective homes to rest up and ready themselves for another day of mischief!🐈🐱😸😺😻
Arilx
at February 03, 2022