I find it strange sometimes how random things I haven't necessarily been expecting to see appear to group themselves into a theme which then runs through our walk. This one was from a few days ago when we did a loop round between the Surrey villages of Puttenham and Compton. 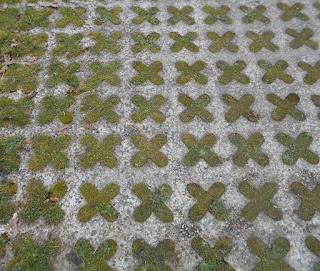 This first shot I took merely because I liked the way the moss had filled in the crosses in the carpark...it looked like a visual pun for the Green Cross Code. That then got me thinking about how old I might have been when I learnt it as a child which in turn sent me down a rabbit hole of nostalgia. You know what a time suck google can be.1970 was when the campaign first launched which would make sense as I started school in the early part of the decade. What foxed me though was the mention of the Green Cross Code man...I have no memory of him, but I did have a vague recollection of a red squirrel called Tufty and having a button badge with him on. Perhaps I was in the Tufty Club?! Anyway I gather this little character was another tool in the Road Safety's armoury to teach us all to get from one side of the road to the other in one piece. Tufty is still very much with us, but has undergone a few updates to appeal to the new generations coming through. I really am showing my age talking about all this aren't I!!

Now it could be said of me that on occasion I might suffer from an overactive imagination. My initial reaction to this looming up ahead was that it was a cross on the bridge, but then the sensible side of my brain kicked in and decided it must be some sort of light for the busy road running over it. 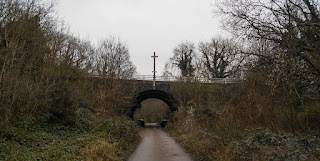 However, as it turns out, my eyes weren't deceiving me. It is a cross and is there to indicate that you are walking on the Pilgrims Way which traditionally ran from Winchester and ended at the shrine of Thomas a Becket in Canterbury. The original route has been tweaked a bit to allow for modern roads. 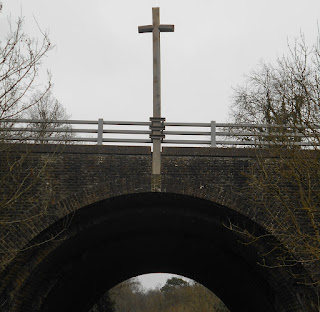 Finally we came across this terracotta Celtic Cross. It was made by the artist Mary Watts in memory of her husband, the Pre- Raphaelite artist G F Watts [I visited his memorial chapel in the village here http://gnatbottomedtowers.blogspot.com/2014/11/hidden-surrey-gem.html. Curiously nobody is entirely sure when she actually created it, but it was intended as another marker for the Pilgrim's Way. It's thought that the sword on the front is a reference to the knight's sword which killed Becket and on the reverse is Christ and images of the pilgrims travelling. The boss shields and the Celtic plaits running down the sides [not shown] were to protect against evil spirits. Naturally that's the part which got my attention! 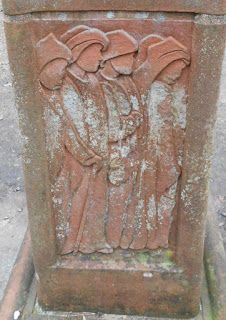 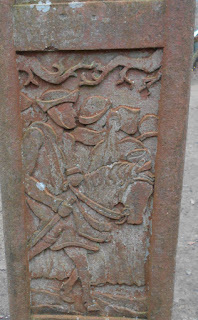 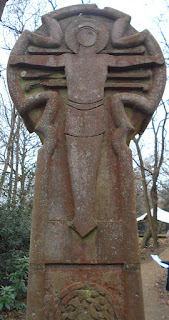 That said it wasn't all crosses...I'll share some other things tomorrow.
Arilx
at February 01, 2022