Huzzah...after 18 months away we were able to return to our local folk club a few months ago. We don't go every time, but usually join our friend C there when they have live music. On our most recent visit it was a fabulous band called "Monkey see, monkey do." Lots of lively jigs and reels....the life affirming, uplifting style of folk which is my absolute favourite. It's on a Sunday night, so accompanied by a pint of ale it not only extends the weekend feel, but finishes on a high note.

I don't know if anyone watches Michael Portillo's "Great British Railway Journeys" programmes on BBC2 [probably only geeky old me!!], but on a recent episode they had a musician playing sea shanties on a concertina except that he wryly commented that he prefers to call it his "constant screamer". This amused me and I was reminded of it when one of the members played a solo spot on the same instrument. His, he had inherited from a former member who is no longer with us, but was quite a character and a reprobate by all accounts. It came in this fabulous hand painted box which shows the flags of East and West Sussex along with the Sussex knucker dragon and the devil who appears if you run round Chanctonbury Ring backwards seven times. The owner kindly let us take some photos. 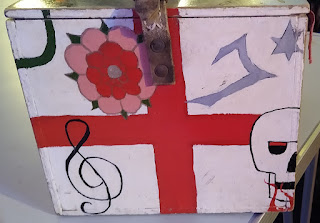 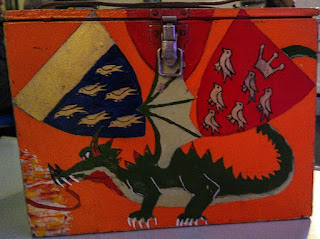 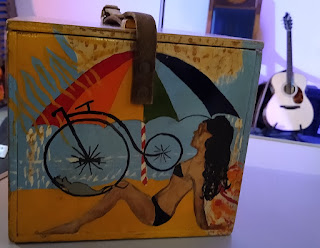 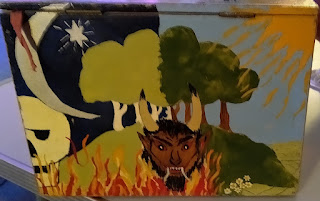 Hope you have a great weekend.