For today 'tis Midsummer and thoughts turn to faeries and other magikal beings..........

"Faerie contains many things beside elves and fays, and besides dwarfs, witches, trolls, giants or dragon; it holds the seas, the sun, the moon the sky; and the earth and all things that are in it; tree and bird, water and stone, wine and bread, and ourselves, mortal men, when we are enchanted"
J.R.R.Tolkien

A few weeks ago I discovered the work of Richard Dadd through the publicity given to the recently published Broadmoor Revealed by Mark Stevens. Dadd [1817-1886] was a Victorian artist who is likely to have suffered from paranoid schizophrenia. In 1843 he murdered his father and was incarcerated firstly in Bethlem Hospital [better known as Bedlam] and later as one of the first patients in Broadmoor. [info from Wiki].  Thankfully for us now, those who cared for him had the foresight to allow him to paint so that we are left to admire his legacy. I am enthralled by the detail of his work and intrigued by the disturbing nature of some of his images. A whimsical Arthur Ransome he most certainly is not. These examples particularly caught my eye. 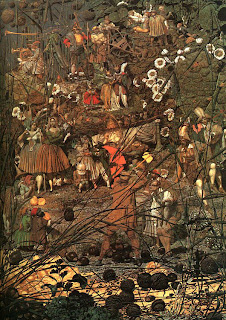 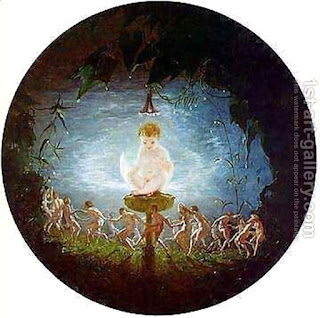 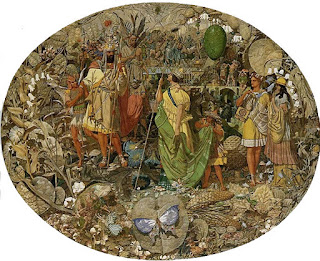 And to the cake? This is my wonky elderflower cake that I  baked as my contribution towards the merry Solstice celebration held with dearest chums last eve. I used some of my homemade cordial in it. 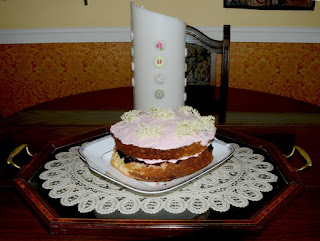