Having recently joined the Strange Things Found in Churches FB group I have been scurrying back through the photographic archives to come up with some images to contribute. I've always enjoyed having a nose around churches but my interest increased frankly when we were looking for free/cheap things to do. For me it's as much about the history as the religion- that tantalising glimpse into the world that our ancestors inhabited and the clues they left behind into how they viewed it. Much of it mystifies me but intrigues me in equal measure. Often I haven't really got a clue what I'm looking at and there's a surprise round every corner. My digging around came up with this beauty last week. 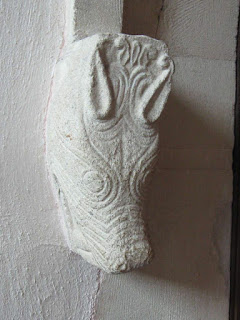 Apart from knowing it's a 9th century Saxon carving of an animal head from St Mary's Priory Church in Deerhurst the internet is very quiet about it. I vaguely remember us seeing it when we were on holiday and us popping in when we were walking but beyond that clueless. I had idly wondered if it was some type of doe but then one look at those flesh ripping teeth put me in mind of a hound of some type. Similar conversations ensued within the group as the idea of a boar or even a horse [there is a passing resemblance to Mari Lwyd] was mooted. In the end though somebody came along with the right answer. It's the Deerhurst Dragon no less and you can read its tale here http://www.glosfolk.btck.co.uk/TheLegendoftheDeerhurstDragon. Having terrorised the neighbourhood for quite long enough it met a grisly end and had its head lopped off with an axe by the local farmworker George Smith.

I am just so chuffed to have had this little mystery solved.