Or maybe the term woodwose is more familiar to some. I encountered my first woodwose a few years ago on holiday in Suffolk. Taking a photo I promptly forgot what it was called and then came across the name again in passing recently. I have only just made the connection between the two. And what is this of which I speak you may be wondering?

Why one of these! 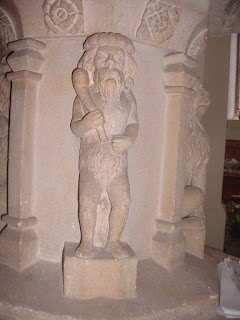 This particular chap is on the font in the parish church in Saxmundham in Suffolk and it would appear that the county has a  fair few scattered around [they do appear elsewhere in the country]. Woodwose or wild man of the woods is a hairy chap, naked and carrying a club. Likely to have been brought forward from an earlier incarnation elsewhere in Europe he seems to have come to prominence here in the Middle Ages. Combining a fascination with man in his base state he often appears along side greenmen but is seen far less frequently- a plausible theory is that he was the epitome of barbarity and a warning to everyone of the dire consequences which would ensue if the social and moral order of the day broke down. This particular fellow is rather rocking the Medieval hat he's wearing which would have been contemporary with the time he was carved. A friend has kindly sent me this link with a current article about a wildman spoon handle found in Woodbridge, Suffolk by a metal detectorist http://www.bbc.co.uk/news/uk-england-suffolk-35050026