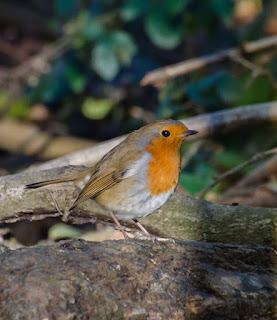 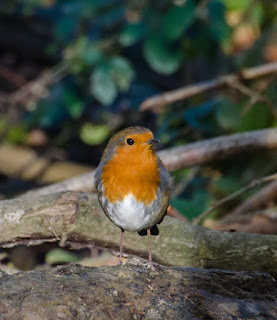 Normally with a blog post title like that you would either expect a folkloric content or a Christmas offering from me but this time may I offer something rather touching and different to the norm.

Yesterday I ended up with a free morning as my usual cleaning client had needed to cancel for this week. Rather than waste the time I grabbed the opportunity to catch up with a long standing chum who I've not seen for a couple of months. She's had her fair share of up and downs over the intervening weeks including the loss of her much loved Nan.

Although 95 and in poor health, Nan's still always been a major part of my friend's life and she played a pivotal role in her childhood. As I was leaving I noticed two robins sitting along side one another on her fence. Knowing how territorial and aggressive they normally are, I commented upon what an unusual sight it was. Her reply was unexpected but moving- "that's my Grandad and Nan" she replied. She explained that whenever her Nan had come to stay at her house and they had sat out on the porch they were always joined by a robin which she always believed to be her Grandad. Last week when walking the dogs in the local woods she noticed a robin criss crossing her path- this she took to be a sign that her Nan had died [she'd known for six weeks that it was only a matter of time] and when she got home she walked in to receive the news that this was indeed the case. Since then she said she has seen the pair of robins all the time in her garden and from this she has drawn great comfort. The funeral is on Monday.