Sorry seems to be the hardest word....

Actually that is not the case for me...I'm always doing that quintessentially British thing and apologising even if it's patently not my fault. Step on my toes chances are I'll say "sorry"- it's like an automatic reflex. For me it's that little two letter word- one consonant and one vowel and by not saying it often enough in the right context it's got me into all sorts of fixes.

Simply it's "no" when someone asks me to do something I don't want to. For all sorts of reasons over the years I've agreed to doing all sorts- I've known I've not wanted to do them, but actually verbalising that seems almost impossible...fear of letting people down, people pleasing..... there are many illogical reasons why I have been unable to politely utter that little word and even if I have, there's always been justification and reasons given. Except of late I have become a little braver. In understanding that part of my managing my stress levels and keeping my anxiety in check is down to me being proactive, I have said "no" twice in the last couple of months [not without worrying about what people will think of me I have to be honest] but I am discovering that the sky doesn't fall in. In fact the reaction has been absolutely fine after all others say it all the time without there necessarily being awful repercussions. That does not mean to say that I am going to be practising so called "safety behaviours" from now on but I shall trust my instinct and step outside my comfort zone when I feel ready.

'Tis a small step but definitely one in the right direction. 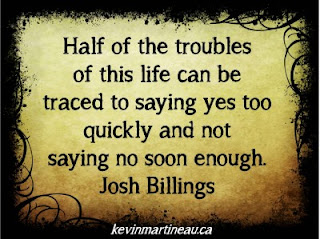