If you've ever had warts they are most mysterious things. I was "lucky" enough to pick up a verruca when I went swimming a few years ago which also gave me a couple of warts on my hands. I tried all sorts of  conventional remedies to get shot of them yet all to no avail. The perceived wisdom was that they would one day just disappear. As if by magic after three years they did just that...spooky.

Mind you perhaps had I followed the Oxfordshire "cure" I saw recommended at the Pitt Rivers museum in Oxford I would have been rid of the little blighters a lot earlier...apparently you should find yourself a big, black slug and rub its underside on the offending articles. Charmingly you then are supposed to impale it on a thorn and when it expires then they will be gone. In retrospect I think I'll leave that one.

The museum is absolutely amazing and free. There's an incredible range of artifacts from all over the globe but the contents of certain cases resonated with me more than others. The items relating to folk medicine and magic particularly drew my attention. Everything from mole's feet to stop toothache through to charms carried by thieves which they thought would send their intended victims to sleep! 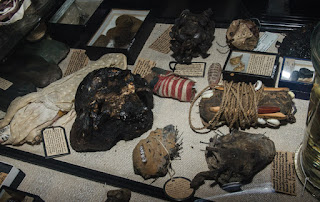 Many items, stuck with pins, thorns and other sharp items have been found secreted away in chimneys- on view was a piece of clay, a toad, an onion and this a bullock heart shown below. The following photo is of rowan tree crosses and loops and a witch post from Yorkshire which was carved with characteristic the cross and bars. All were intended to stop witches from being able to enter the property and protect the occupants. The silver stoppered bottle belonged to an old lady in Hove and she actually believed it contained a witch! 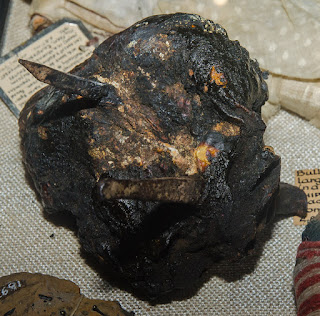 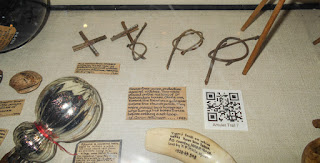 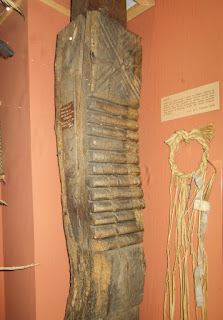 Mandrake roots. These were grown by Pomona Sprout in Harry Potter and were used to reverse the effects of the pupils who had been petrified by the Basilisk. Their natural form is quite human like and with an added embellishment to increase the similarity they were used as poppets in sympathetic magic. 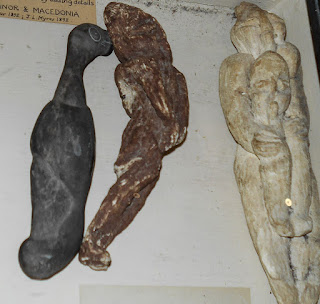 Finally these two snaps are one of a Siberian shaman spirit doll and a healing necklace. The central disc was believed to be imbued with spiritual powers which would save a sick child when hung around its neck. 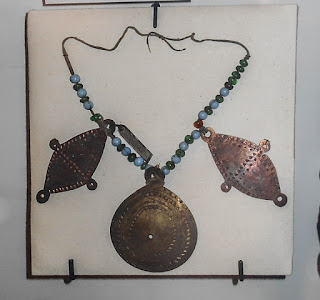 There will be more from the museum tomorrow but I think it only fair to warn you that the material is much darker- the treatment of the remains of your enemies. This will include photos that some may not want to view so please give it a miss if you're squeamish. I have mulled over whether or not to post the pictures but the items are on public view to all and the blog and its contents are ultimately my decision and provide me with a record of my memories.