Sprinkling a bit of magic

Last week my parents went on the Harry Potter studio tour....I wasn't jealous in the slightest....nah...can you hear my little feet stamping from here?!! I have been before so I know how amazing it is and it was fabulous being able to see the photos of the Hogwarts Express which wasn't there when I visited.

Having started off by rereading the first book to refresh my memory before I wrote this http://gnatbottomedtowers.blogspot.co.uk/2015/12/a-magical-invitation.html I just carried on reading and before I knew it I had reread all of them. I finished the last one just before we went to Oxford earlier this month so you can imagine my excitement when I turned a corner in the city and came across this 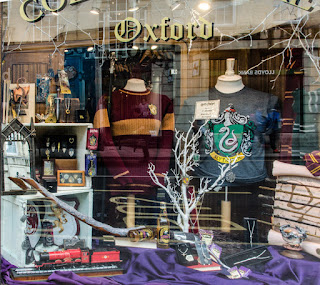 Later on we had a nose around Christchurch College. I gazed in awe at The Great Hall [Mr GBT however, was far more nonchalant for he's a Cambridge man..."the other place" as the Porter wryly told me!] 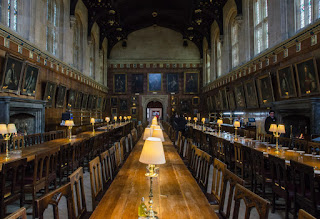 Having recently watched the later HP films I commented afterwards that it bore more than a passing similarity to the one on the studio tour. Only now do I find out that it was actually used in some of the scenes in "The Philosopher's Stone" as was the staircase leading up to it!

With all the furore surrounding the recent release of "Harry Potter and the Cursed Child" I expect fans will be pleased to hear that the script is going to be published in book form shortly. For me the magic ended with "The Deathly Hallows" and that's where I shall leave it in my imagination. I shall leave you with a link showing the beautiful artwork by Jim Kay http://www.telegraph.co.uk/books/childrens-books/harry-potter-philosophers-stone-illustrations/albus-dumbledore/