I spent yesterday doing a final clean for my chum Icebadger by way of a thank you for all her hard work in making my coloured tatters and as it was technically my day off, I decided to carry on up the road to the village where I spent my formative years.

Parking up near our old house which was a new build back in the day [we're talking 1970] I cut through the churchyard. I don't often visit, but when I do I like to note and pay my respects to the little girl who died in 1975 aged only five. I was a few years older than her, but I remember her short time at school before she lost her battle to cancer. It still saddens me. Then it was off down the steps opposite and across the road to the Six Bells. 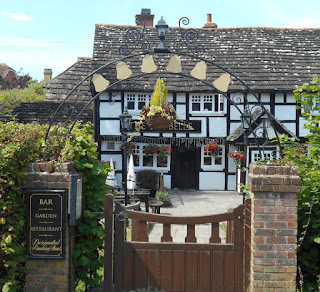 I have much happier memories of this pub garden. During the summer months we used to go there with our parents and a set of family friends and just relax. My sister and I thought we were the bees knees with our Coke in a bottle and a packet of crisps. This was always a huge treat...fizzy drinks and savoury snacks didn't feature regularly. At the time the then vicar used to drink in the pub on a Saturday lunchtime...he could often be seen to exit the bar at high speed and hare up the steps to the church just before he was needed at a wedding. I'm not sure the clergy would get away with it these days!

A short wander along brought me to this familiar hall. What I hadn't noticed before though was it is called the Women's Hall. 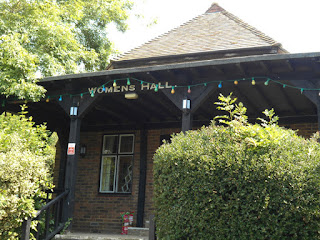 I took a photo to remind me to find out about it and now I have discovered that it was built in 1923 on land and with money donated by the Bliss sisters. Ellen and Edith were contemporaries of the Pankhursts and promoters of women's welfare. The hall was set aside as a place for women to meet and socialise and it was joined by the Mother's Garden next door in 1926. The idea of women's rights and needs was still very much in its infancy at the time.

Crossing the road brought me to the Unitarian Chapel. It's a very simple affair, but a spot which immediately offers tranquility to those who open the gate and spend time in the grounds. I'm always pleased to see old, worn tombstones and ones with the odd putto or two add a note of Victorian melodrama

There's a little sign on the door which asked simply that you showed your respect for the sacred space by making no noise and leaving no litter. This charming little fellow disregarded any such instructions and continued to photobomb me in an attempt to get my attention. In the end I gave in...he was a sweetie 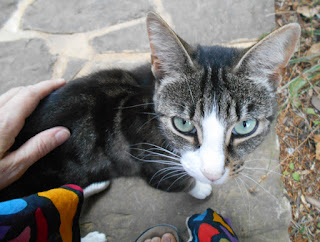 Just a little break in my daily schedule, but one which I thoroughly enjoyed.