Your Money or Your Wife.

I'm at a pivotal stage in life here where our teens are flying the nest and a few couples I know have decided to divorce. Until the first court was set up in 1857 it was extremely difficult to obtain a divorce and back in the 19th century it would cost £3000 [15k in today's money]. Wives were still considered as chattels and it was the custom in some rural areas for husbands to sell their wives as they would any commodity.

Leading his wife round the market with a halter round her neck monies would be exchanged and she would leave with her new partner [sometimes a complete stranger but often already her lover]. Tales abound of drunken celebrations ensuing after successful transactions and it being a satisfactory outcome for all parties with the ending of an unhappy union. The outcomes could be surprisingly...some women went on to happily marry their new partners, others ran away/married other men or some returned to their original spouse. 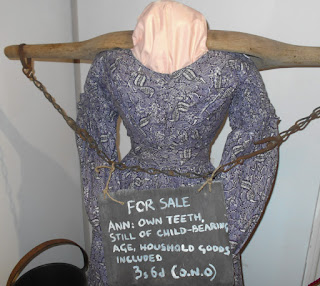 The last known instance of wife selling in my home town is of one Ann Holland known as Pin Toe Nanny. Mr Johnson who bought her had to sell his watch in order to afford her and she stayed with him for a year in which time she bore him a child. After doing her duty she ran away and later married one Jim Smith! The practice eventually was outlawed and those who engaged in it faced a six month prison stretch if caught.