"Wondered if you might be interested in doing a bit of voluntary work for the National Trust over at Uffington?" asked a dancing chum a few weeks back. Remembering my manners to not bite his hand off, I didn't need asking twice and so it was that a car full of some of my Mythago chums travelled over to Oxfordshire yesterday.

Discussing it we'd come up with a cunning plan to make a day of our trip and frankly I haven't roared so much with laughter in some time. We're all Druids and to say we can be quite earthy at times may be the understatement of the day but let's cut the waffle shall we Aril!

My suggestion was a quick stop off at the Seven Lambourn Barrows. This is a discovery Mr GBT and I made a few years ago when we used to travel up from Sussex to visit my late MIL who was in a nursing home near there. It doesn't seem as well known as some of the other ancient sites in the area and I've yet to ever find anyone else there at the same time even though it's just off the road. Being both a Scheduled Monument and an SSI, it is the peacefulness of it which is part of its personal appeal for me. The natural grassland has been left alone to thrive and it's full of wild flowers aswell as barrows. The oldest is a Neolithic long barrow and along side sit several Bell barrows [they are surrounded by a ditch] and a couple of of Disc barrows with a ditch and outer bank. Awed by the work of our ancestors and the beauty before us we all naturally fell silent. None of the others knew of it, but all came away saying that they will definitely return. I have visited many such sites before but this is my number one. There is an ambience I haven't found elsewhere.

One of the barrows with a beech tree growing on top. 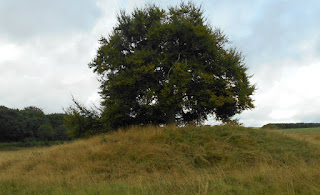 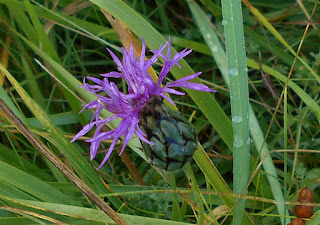 Devil's Bit Scabious. The plant was believed to be a cure for scabies. The devil took exception to its medicinal qualities and in a rage tried to bite all its roots off. That's apparently why it has such short roots.... 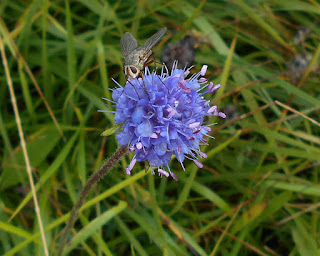 After a quick breather we went on up to the White Horse at Uffington for a spot of this.... 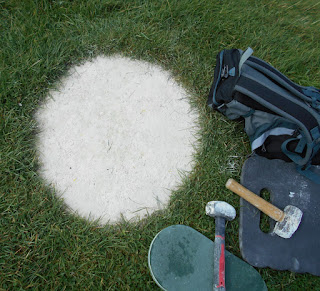 Chalking the White Horse no less. That big white dot is its eye. What a privilege. Best show you our handiwork then. We were working on the top of the head. I always love anything like this. Doing conservation work as a National Trust volunteer was how I met Mr GBT so it makes complete sense that I was in my element. 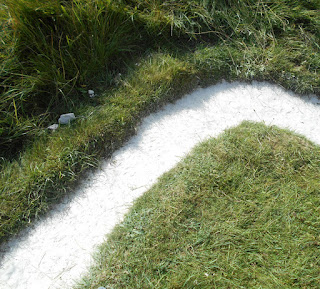 Despite the forecasted rain we were lucky that it stayed dry which allowed me to drink in the views. The ridges are known as the Giant's Stairs and were caused by glaciation. The mound below the horse is Dragon's Hill which is a natural feature with an artificially flattened top. On a previous visit I stood on the top of that with several Red Kites circling just above my head. It was amazing to see them at such close quarters. 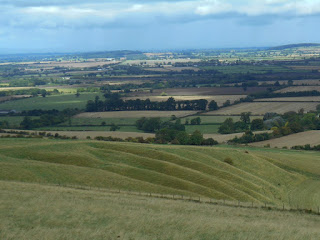 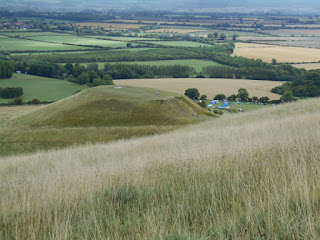 We'd booked for an hour's worth of chalking [unsurprisingly it's a popular activity and the Trust are never short of numbers] so having downed tools we wandered up to the White Horse hill summit to view the well preserved remains of the Iron Age Uffington castle. You can pick up the Ridgeway from the back of the hill and a mile along it you come to Wayland's Smithy. It's yet another extraordinary example of the engineering feats achieved by our ancestors. The long barrow was built upon an earlier tomb and dates to 200 years after West Kennet in Wiltshire. The four remaining sarsen stones at the entrance look quite small from a distance but are more akin to the Avebury ones in scale once you are near them. Left to me I'd have chosen the same stone for its eyecatching diamond shape too! I know I'm a bit blurred in the final one but it makes a change for me to be actually laughing in a photo for once that I thought I'd include it just for its novelty value. My friend was making me giggle and it sums up the feel of the whole day perfectly. You'll have to forgive the lairy trousers! 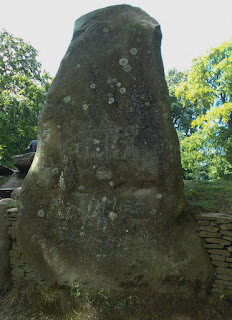 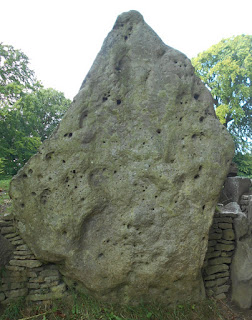 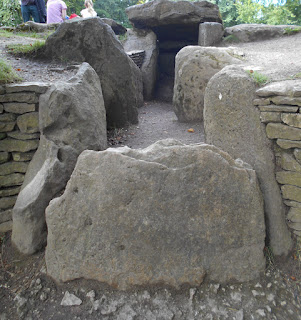 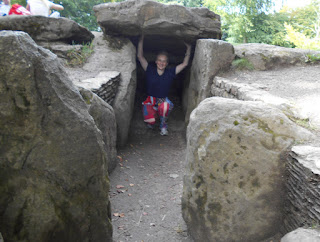 If you want to do the chalking the NT hold sessions twice a year. It's free but you need to book [they last 30 mins but we booked two] and if you aren't a member you will need to pay for parking. They provide the kneeling pads and hammers.